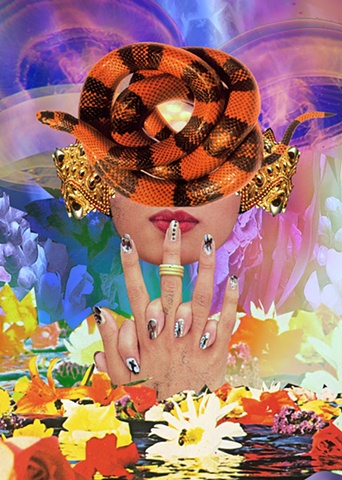 Los Angeles based Astral Eyes, known originally as owleyes & now on Instagram as Astraleyez, draws from an instinctual knowledge of ritual and mystical practices that functions as a physical manifestation of the divine. By entering into a meditative state Astral Eyes creates images through acts of divination, then channels positive energy, thoughts or questions into the alchemical process. The visible image, now encoded with the invisible information, carries a faint charge of the unseen world within it. Once sent into the internet, these “Digital Icons” now serve to open new modes of perception. By sharing these Icons with others around the globe, a polarity shift between the solitary and the communal is formed, these transmutations are intended to develop a unity of dualities.

"owleyes is an artist who makes collage seem like cryptography, an alchemist who turns found imagery into profound imagery." -La Weekly

“He’s an information primitive, manifesting the primal world into the digital world and smashing together animals, people and pure light into visionary works containing secret information from the astral plane.:- OBEY